The ROI of social media marketing and Super Bowl campaigns has been a hot topic for some time now.

Companies are finally viewing these initiatives in terms of business outcomes, not just branding vehicles.

This season, brands leveraged Chirpify to activate their Super Bowl campaigns for conversion.

Here are a couple of examples… 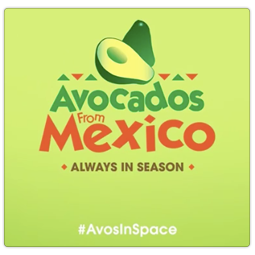 “Brandwatch says the social media buzz is all about avocados, with 50 percent more hashtag mentions than the next closest Super Bowl advertiser.”

By activating the hashtag with Chirpify it quickly became the most interacted with Super Bowl ad, beating out other advertisers like Bud, Honda and Snickers.

More on Avos right down here 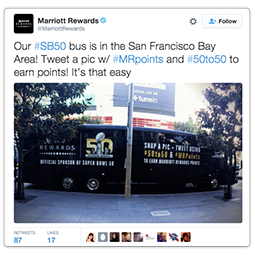 Marriott has used Chirpify to modernize and extend the Marriott Rewards program for some time now, enabling a currency exchange between social media and Marriott Rewards, but they also leverage Chirpify’s campaign activation tech to supercharge marketing campaigns.

Brandwatch says the social media buzz is all about avocados, with 50 percent more hashtag mentions than the next closest Super Bowl advertiser.

AvosInSpace Super Bowl commercial featured the hashtag #AvosInSpace. It was activated by Chirpify and rose to become the most interacted with Super Bowl ad hashtag. Our analytics show that the campaign garnered over 993,310,182 impressions. In the first three days of the campaign, according to Marketing Land’s Matt McGee, “#AvosInSpace has been mentioned more than 33,000 times since the commercial’s debut. That’s about 50 percent more mentions than the second-place hashtag, #Pokemon20, with more than 22,000 mentions.”

That’s a pretty impressive difference. What’s more impressive, though, is the conversion that happened through this activated hashtag. Avocados from Mexico used the Chirpify platform to engage and convert consumers who interact with #AvosInSpace.

@KimBlomgren Thanks for your tweet! Here’s an intergalactic recipe for the big game: https://t.co/gVbi2xqGWn #AvosInSpace

Consumers who tweeted with the hashtag were rewarded with one of several “out of this world” recipes like this one for Omega Guacamole. In the background Chirpify was listening, applied rules from its rules engine and automatically responded to the consumer. Within the communication from Avocados from Mexico, people found a URL for the campaign landing page, avosinspace.com where they had the opportunity to win an “out-of-this-world #AvosInSpace inspired experience” such as a ski trip in Colorado or South Beach Experience in Miami, FL.

The difference in mentions is a worthwhile measure of the impact of rewarding consumers for interacting with the brand. And, as we can see with the #AvosInSpace campaign, it is indeed significant. The reward increases organic reach. As people shared this brand moment on Twitter, others were likely to see it and join in because they, too, were rewarded for participating.

Moreover, by activating their Super Bowl ad campaign in this way, Avocados from Mexico tapped into consumers’ growing desire for a better experience where they measure brands by how much utility they provide. Social consumers have a mobile remote control in their pocket that they can use to not only engage, but more importantly, transact with a brand by simply setting off triggers like the #AvosInSpace hashtag. Avocados from Mexico is using this omni-channel remote control to their advantage with this activated ad that converts marketing instantly.

Not only did #AvosInSpace get the most mentions, they were almost entirely positive. Brandwatch tracked Twitter mentions among early release Super Bowl advertisements for positive or negative sentiments, and the avocado hashtag was practically all positive according to Marketing Land. Across metrics, the #AvosInSpace Super Bowl ad is proving the power of an activated ad and its ability to expand a brand’s reach and drive outcomes with conversion-based activities.

If you’re going to have a hashtag in your ad, you should activate it.